Jerusalem: Naftali Bennett, Israel’s likely next prime minister, is a self-made tech millionaire who dreams of annexing most of the occupied West Bank.

Bennett has said that creation of a Palestinian state would be suicide for Israel, citing security reasons.

But the standard-bearer of Israel’s religious right and staunch supporter of Jewish settlements said on Sunday he was joining forces with his political opponents to save the country from political disaster.

A former commando, Bennett named his eldest son after Netanyahu‘s brother, Yoni, who was killed in an Israeli raid to free hijacked passengers at Uganda’s Entebbe airport in 1976.

Bennett has had a long and often rocky relationship with Netanyahu, working between 2006 and 2008 as a senior aide to the then-opposition leader before leaving on reported bad terms.

Bennett stormed into national politics in 2013, revamping a pro-settler party and serving as minister of defence as well as of education and the economy in various Netanyahu governments.

A former leader of Yesha, the main settler movement in the West Bank, Bennett made annexation of parts of the territory that Israel captured in a 1967 war a major feature of his political platform. 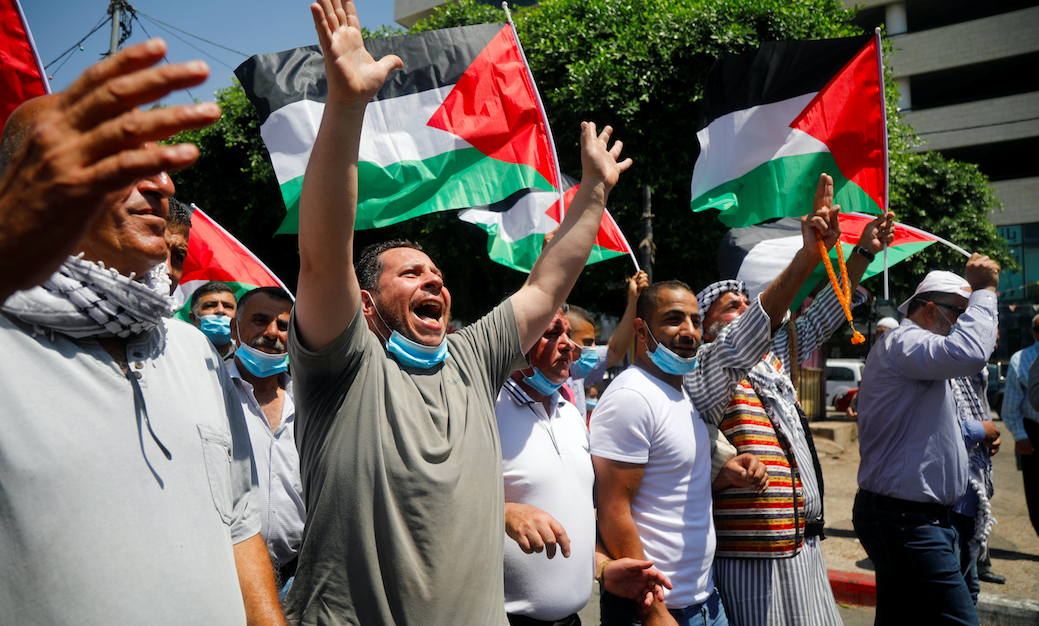 Palestinians take part in a protest against the United Arab Emirates’ deal with Israel to normalise relations, in Nablus in the Israeli-occupied West Bank August 14, 2020. Photo: Reuters/Raneen Sawafta

But as head of a so-called government of “change” that will include left-wing and centrist parties, while relying on support in parliament from Arab legislators, following through on annexation would be politically unfeasible.

Bennett said on Sunday both the right and left would have to compromise on such ideological matters.

Born in the Israeli city of Haifa to immigrants from San Francisco, Bennett is a modern-Orthodox religious Jew. He lives with his wife, Gilat, a dessert chef, and their four children in the affluent Tel Aviv suburb of Raanana.

Like Netanyahu, Bennett speaks fluent American-accented English and spent some of his childhood in north America, where his parents were on sabbatical.

While working in the high-tech sector, Bennett studied law at Jerusalem’s Hebrew University. In 1999, he formed a start-up and then moved to New York, eventually selling his anti-fraud software company, Cyota, to U.S. security firm RSA for $145 million in 2005.

Last year, as Netanyahu’s government sought to press ahead with West Bank annexation and settlement building in the final months of the Trump administration, Bennett, then defence chief, said: “The building momentum in the country must not be stopped, even for a second.”

The annexation plan was eventually scrapped when Israel formalised ties with the United Arab Emirates. Analysts see little chance of it being resurrected under Donald Trump’s Democratic successor, President Joe Biden, if ever.

Nonetheless, Palestinians are likely to regard Bennett‘s elevation as a blow to hopes of a negotiated peace and an independent state, the long-standing diplomatic formula that Biden favours.

After Israel in March held its fourth election in two years Bennett, who leads the far-right Yamina party, said a fifth vote would be a national calamity and entered talks with the centre-left block that forms the main opposition to Netanyahu.

An advocate of liberalising the economy, Bennett has voiced support for cutting government red tape and taxes.

Unlike some of his former allies on the religious right, Bennett is comparatively liberal on issues such as gay rights and the relationship between religion and state in a country where Orthodox rabbis wield strong influence.