Daimler has agreed to buy 3G and 4G licences directly from Nokia, ending a long-running intellectual property dispute that could have forced the German group to suspend the production and sales of its cars and trucks.

The Mercedes-Benz maker had been sued in several German courts for refusing to buy licences for the technology that connects in-car navigation and entertainment systems to the internet and underpins semi-autonomous driving capabilities.

While rivals such as VW have bought licences, the premium manufacturer had balked at the cost, arguing instead that Nokia should license suppliers such as Continental and Bosch, who build the telematic control units in which connected technologies are housed.

In its legal filings last year, Nokia maintained that it offered Daimler a fair price for the licences and that it was entitled to recoup the billions of euros spent on the development of its inventions.

A series of judgments last year went against Daimler that, if enforced, could have prevented the manufacturer from building or selling cars equipped with tech relying on Nokia patents. But Nokia chose not to pay billions of euros in bonds to enforce an injunction before appeals against the verdicts were heard later this year, including one referral to the Court of Justice of the EU.

Daimler’s decision to settle the case brings an end to all legal proceedings between the two companies.

“The agreement is a hugely significant milestone which validates, once again, the quality of our patent portfolio, the contribution of Nokia’s R&D to the connected vehicle industry, and the growth opportunities for our automotive licensing programme,” said Jenni Lukander, a president at Nokia Technologies.

In a one-line statement, Daimler, which has a large manufacturing base in Germany, said: “We welcome the settlement — from an economic point of view and because we avoid lengthy juridical disputes.”

Neither party revealed the financial terms of the agreement.

Nokia still faces a separate legal fight with Continental in US courts.

The Dax-listed supplier, which along with Bosch supported Daimler’s case in the German courts, has also lodged a complaint with the European Commission, arguing Nokia is abusing its dominant market position. 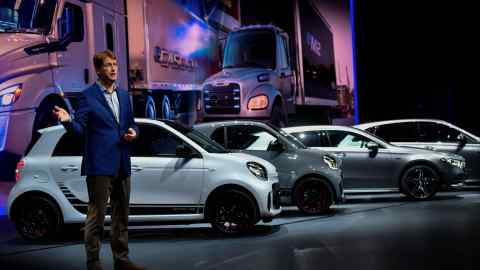 Nokia, which prefers to license the end-product rather than the component manufacturers, claims it has “continually made fair offers for licensing, providing a range of flexible approaches — direct to automakers, to tier-1 suppliers and through a collective licensing pool alongside other players in the industry”.

However, Continental maintains that these offers were not fair, reasonable and non-discriminatory. “Nokia made a promise to license anyone, but they are not keeping that promise,” a person close to the company said.

With so-called “over the air” updates to software in cars becoming ever more important, German parts makers are concerned that Daimler’s settlement might provide a worrying precedent that might harm the competitiveness of companies in Europe’s largest economy.

The companies, who also sell connected devices, want to be able to offer a fully licensed product to their customers.

“German courts tend to grant injunctions even if the party that is sued does not manufacture the product, and has not been offered a licence,” the person added.