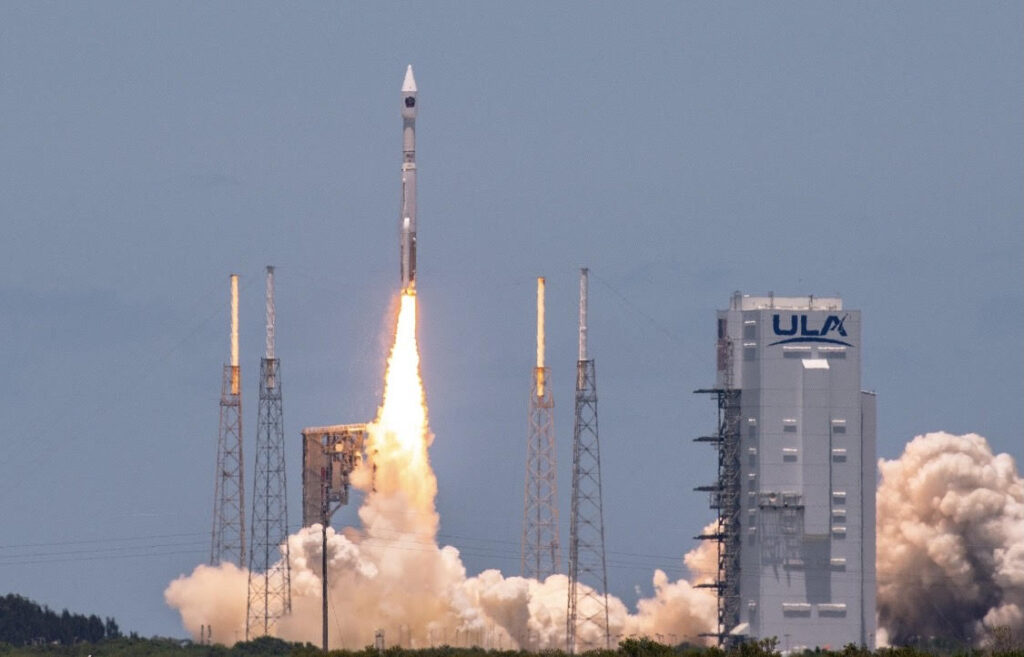 WASHINGTON: The Space Force plans to award contracts this year for early development of tech to underpin potential next-generation launch capabilities — for example, to put DoD payloads into cislunar orbit near the Moon or routinely launch reusable spacecraft to fix broken satellites.

The Space Force’s 2022 budget request doesn’t include direct funds for a follow-on Phase 3 to the current National Security Space Launch (NSSL) program. However, according to service budget justification documents, there is $221 million in research, development, test and evaluation funding for NSSL “Next Generation Launch System Investment.”

In particular, $36.7 million is specifically budgeted to support commercial launch providers via public/private partnerships to work on capabilities to launch new types of military space missions to “increase U.S. space dominance through the end of the decade and beyond.” Examples, the justification document say, include, “orbital transfer, on-orbit servicing, digital engineering, and novel on-orbit propulsion technologies.”

The Space Force in addition will use the $90 million added by congressional appropriators to its 2021 NSSL budget for “future development work” to kick start development of such “enabling technologies,” Ann Stefanek, a spokesperson for the Department of the Air Force, said in an email. (The department is responsible for both Air and Space Force budgets, in the same way the Navy Department handles it for the Navy and Marines.)

These initial funds are kind of downpayment on a possible larger, and longer-term, R&D effort to support launches for cutting-edge space missions in NSSL’s post-2027 manifest.

“After these potential and initial agreements, the USSF is considering establishing a continuous Research, Development, Test and Evaluation (RDT&E) program to accelerate the development of transformational commercial space access, mobility, and logistics technologies that can be on-ramped when available,” she wrote. “This RDT&E program will play a significant role in the shaping of the next NSSL launch service procurement strategy, which will strive to incentivize and leverage industry innovation.”

The United Launch Alliance (ULA) and SpaceX nabbed the hard-fought NSSL phase 2 awards last year. The budget request does not specify how many of the five planned 2022 missions will go to each contractor.  The most recent NSSL Phase 2 launch, using an Atlas 5, took place on May 18 and carried a new Space Based Infrared System (SBIRS) satellite to join its four sister satellites making up the missile warning constellation. (The sixth and final SBIRS is to be launched next year.)

Col. Robert Bongiovi, director of the Space and Missile Systems Center’s (SMC) launch enterprise systems directorate, told the Mitchell Institute last November that the service doesn’t want to “box itself in” with NSSL Phase 3 plans by not being prepared to undertake non-traditional launches. Space Force leaders are concerned about the need to stay ahead of the threat from peer competitors, especially China, to US space systems — as well as the increased interest by Beijing and others in the potential for exploitation of the Moon and other space resources.

In February, the Space Force updated its original Request for Information to Support National Security Space Launch (NSSL) Program Planning to scout out industry capabilities, extending the deadline for industry responses to March 5. The revised RFI says the service intends to make awards to potential NSSL Phase 3 providers in fiscal 2021 via something called the Space Enterprise Consortium (SpEC).

The RFI explains that the Space Force is considering, for example, the need for capability to rapidly launch from commercial spaceports rather than from large, well-known military launch ranges that might be targeted by adversaries in wartime. It also is eyeing potential future launches to orbits outside the NSSL’s current focus on Geosynchronous Orbit (GEO, some 36,000 kilometers above the Earth). GEO is where the bulk of national security satellites traditionally have been operated. The RFI also asks contractors about their potential to provide improvements in logistics and manufacturing practices via digital engineering tech.