Babylon Health, a UK–based telehealth company, announcedit is set to go public following a merger with Alkuri Global Acquisition Corporation. The merger gives Babylon a proforma equity valuation of $4.2 billion, more than double the $2 billion valuation the company commanded just 2 years ago. Once the deal is finalized in late 2021, Babylon will trade on the Nasdaq exchange under the symbol “BBLN.”

A relatively new company, Babylon is a leader in video medical appointments (telehealth) and AI-powered diagnoses. The company has partnered with Mount Sinai Health Partners and the U.K.’s National Health Service (NHS) in an effort to expand globally. Babylon claims to cover 24 million patients worldwide and reported $79 million in revenue for 2020. The company expects revenues to total $321 million this year.

Rumors also began to swirl surrounding Pershing Square and Universal Music Group, as Bill Ackman’s SPAC vehicle looks set to complete the largest deal ever. The potential merger, which would value Universal at roughly $40 billion, would be the largest SPAC merger in history. Currently, the largest deal remains the merger of Altimeter Growth and Grab, which totaled roughly $30 billion. For more on that deal, click here. 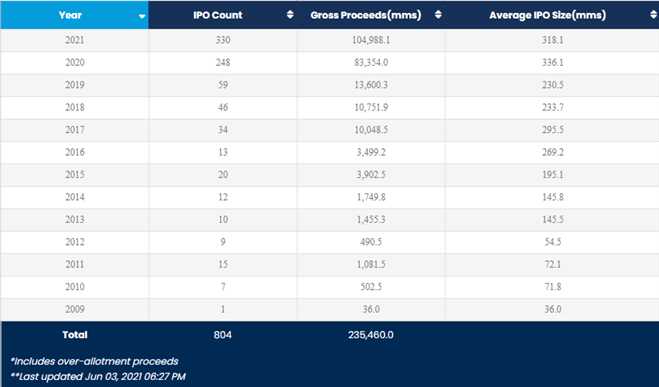 Despite the recent lull in SPAC activity, deal volume in 2021 still far outweighs any year in recent history. The flood of transactions has certainly caught the eye of regulators, with SEC Chair Gary Gensler calling for increased oversight over blank-check companies and associated transactions. Currently, just under $105 billion in SPAC deals has closed this year, with Pershing Square’s rumored record deal yet to be finalized. As of June 3, 308 blank check companies are searching for an acquisition target, with just 22 having announced a deal in the first 5 months of 2021. The chart below details the highest performing SPACs that have announced a merger, in terms of ROI. 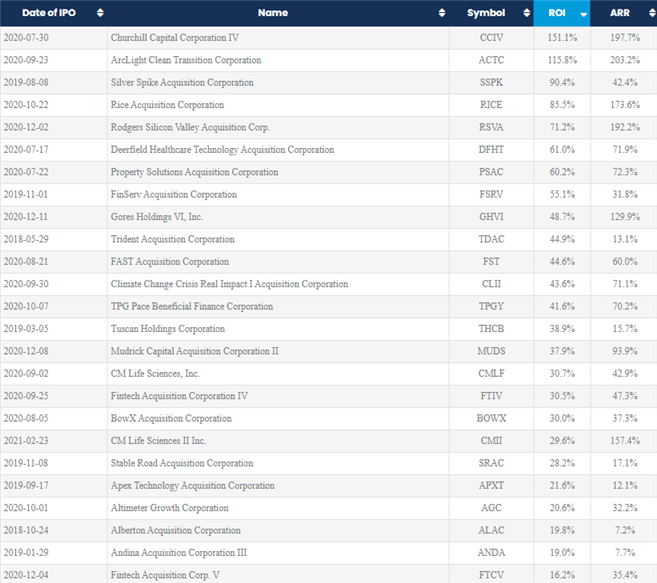