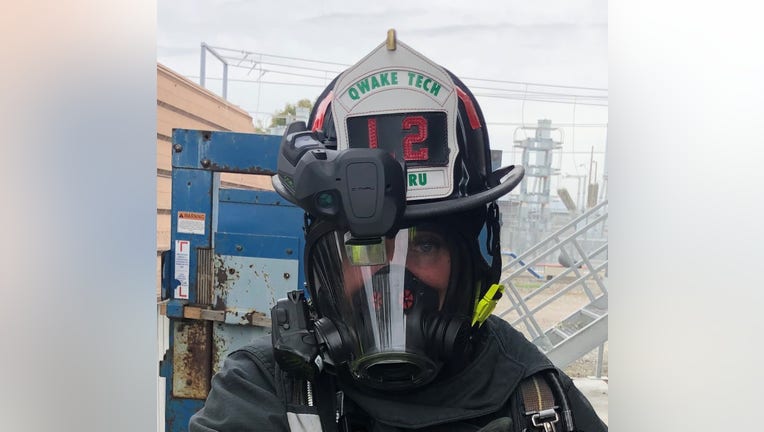 Captain Jane Hunt of the Menlo Park Fire Protection District, based in Menlo Park, Calif., tries out the helmet mounted C-Thru Navigator Unit, a hands-free technology that makes it easier for firefighters to navigate a burning building. (Photo courte

MENLO PARK, Calif. – Firefighters with the Menlo Park Fire Protection District have new technology that helps them navigate through burning buildings and find people twice as fast, according to the Fire Chief.

The technology is called the C-Thru platform. It includes a navigation unit that attaches to the firefighter’s helmet and allows them to clearly see objects in a burning building.

Made by San Francisco based startup, Qwake Technologies, the C-Thru navigator uses thermal imaging technology to help firefighters identify objects in their path, retrace their steps to find exits and communicate with other firefighters.

The Menlo Park Fire Protection District is the first in the nation to use the new technology.

Fire Chief Harold Schapelhouman said they signed a contract on Friday to purchase units for each of their 40 front-line firefighters, for a total of $210,000.

“We’re able to find people about twice as fast now compared to what we were before, with this technology,” Schapelhouman said. “It’s a game changer.”

Schapelhouman said they’ve been working with Qwake Technologies for the past two years, testing various prototypes of the C-Thru platform and providing feedback.

With this new contract, firefighters would work with designers to develop the final version of the product.

One of the biggest benefits of the navigator, according to Schapelhouman, is that its hands-free.

Most firefighters use a handheld thermal imaging camera or TIC, which attaches to their belt or air pack. 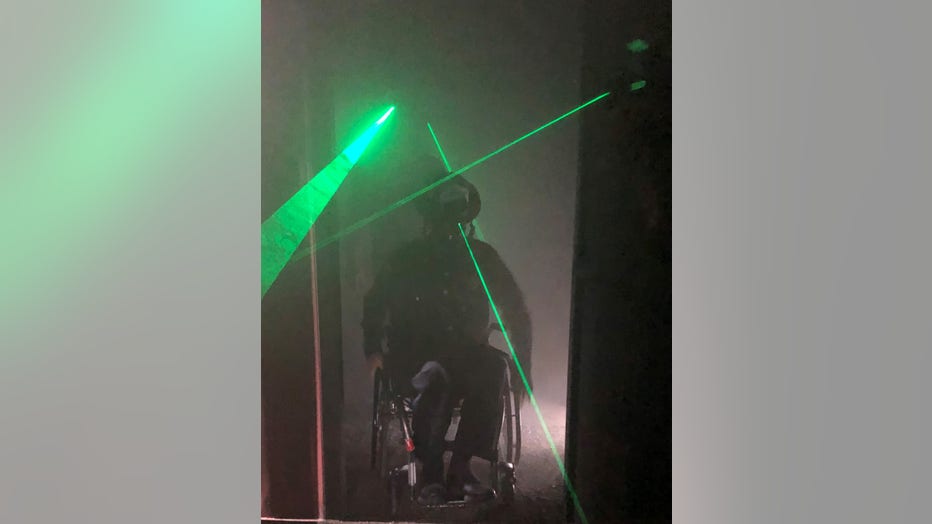 “You have to lift it up to look through it so it’s not exactly the most convenient piece of equipment. But it is more beneficial than having nothing, which is what we had when I started. You didn’t have any of this stuff so you were pretty much crawling around in the blind,” Schapelhouman said.

Back then, with zero technology, firefighters could easily get lost or disoriented, making it difficult to exit the building when they find someone to rescue.

The C-Thru navigator mounts onto helmets with an eye piece that hangs down for firefighters to see through. Schapelhouman said that when looking through the eye piece, objects are painted with a green hue, making it easy to differentiate furniture from people.

The green lasers give firefighters depth and spatial awareness that they did not have before.
Plus, the lasers are safe for the eyes.

Firefighters can also use the C-Thru navigator to communicate with other firefighters wearing the device, allowing them to call for help with the touch of a button. It also livestreams incidents to commanders outside the building, who can make tactical decisions based on what they see.

The Fire District did a demonstration for other fire agencies and members of the media on Friday. Schapelhouman said people who saw it were amazed, wondering how something so small and seemingly simple could be so beneficial.

“The answer is amazing technology. It’s taking things that we’ve been thinking or wishing for the last 10 to 20 years on multiple levels and putting them all together and it works,” Schapelhouman said. “This isn’t a pipe dream. This is real and it’s happening.”