Among tech ETF investors there is a rather popular idea doing the rounds that many stocks with ‘excitable’ valuations will at some point ‘grow’ into their multiples.

Let me give you an example. I’m a great believer that at some point in the next few decades we’ll see a fundamental revolution in what we eat, which will ultimately involve faux meat, or cultured meat as it is sometimes called. In the meantime, we’ll have intense competition around plant-based alternatives. In this fast-growing space we already have the making of a champ in the shape of Beyond Meat, which is worth a meaty $9bn. One afternoon, out of sheer curiosity, I decided to build a very, very simple price-to-sales model to test on what basis that $9bn market cap might make sense given the company’s last annual sales numbers of not far over $400m.

I assumed that over the next three years Beyond Meat grew its sales at a compound rate of 35% and then in 2024 has margins that are equal to or a bit better than market leaders in the food space, such as Nestle or Unilever. Then I factored back in a chunky 35 times price to earnings multiples. Would we still get to $9bn or $10bn? Just about, though only if we assumed the most ambitious sales growth imaginable and absolute world class margins. But even then, we’d only be looking at say 50% to 100% price uplifts if Beyond Meat nixed every imaginable target. And that is the best of all possible worlds.

My point here is that markets are assuming that growth businesses such as Beyond Meat will grow at astounding rates into their valuations. But I do not want to just pick on Beyond Meat, which, by the way, I think is a great innovator. Tech ETF investors are buying into a whole legion of what I like to call ‘The Next Faangs’ [Facebook, Amazon, Apple, Netflix, Google]. These are mid-cap businesses in the B and C league that are currently loss making but where sales growth is expected to be exponential.  And the name of the game here is obvious: they are mapping the success of the first wave of Faangs into a new generation of businesses – many already valued in the billions – with the same ambitious targets.

In a recent note, Vincent Deluard, StoneX’s director of global macro strategy, ran the numbers on this tech optimism and come back with some shocking results. The first wave of tech titans – the Faangs – ‘grew 54-fold in 17 years and their margins remained abnormally high,’ with an average compound annual growth rate of 26% in terms of sales, he found.

Deluard then analyzed the 351 Russell 3000 companies currently trading at more than 10 times sales: about 50% are in healthcare and 25% in technology. He then used the price-to-sales ratio as the main metric, largely because a majority of these companies have negative earnings. Like the Faangs, he multiplied their revenues by 54 in the next 17 years, valuing them at 6.4 times sale in their terminal state. Last, but by no means least, he discounted this expected value at an annual rate of 10%. As you’d expect the maths don’t add up. Out of those 351 stocks the capitalization of 59 stocks (many in healthcare and biotech) already exceeded what his ‘hyper-growth’ scenario predicted.

Based on this, Deluard argues that we are entering what can only be called a ‘Growth at Any Cost’ valuation paradigm. Everyone is so determined not to miss out on the Amazon of tomorrow ($100 invested in Amazon at the IPO would have compounded to $216,000 today) that they are ignoring virtually every valuation metric known to humankind.

And we all know what happened the last time this experiment was tried. For a reminder, Deluard also looks at what happened to the ‘hyper-growth’ stocks of the internet bubble.

In March 2000, 278 stocks traded for more than 10 times sales. Only 70 survived. Of the 278, 47 stocks were a total wipeouts while another 89 lost between 50% and 99%. Only 11 stocks rose more than tenfold. If this was a venture capital (VC) shop, those ten-bagger success ratios would have been laughed out of the Monday morning meeting!

According to Deluard, a cap-weighted portfolio of these hyper-growth stocks would have returned just 74% since March 2000, versus 257% for the Nasdaq 100 index and 311% for the S&P 500 index. The only way these numbers would have worked in investors favor was if said imaginary stock portfolio was equal weighted, and investors ‘stoically watched their portfolios lose 80%+ without selling’ whilst never rebalancing or taking profits.

But of course, it gets worse than this. Because all these numbers assume that 100% of any upside is captured by investors, which rather idealistically assumes that most techs give away huge amounts of stock options to directors and staff. Google for instance has given out about 14% of its shares to its employees in the past 12 years and many biotech and healthcare firms are giving away even more paper to their corporate insiders. So all these numbers only stack up if there are no buybacks. As we say in the UK, fat chance.

My point is that any valuation metric based simply on exponential growth rates for sales – with profits coming at ‘some point’ – is doomed to failure. Public market investors, especially in ETFs, are not VC investors. They don’t have the same risk tolerances and eventually the story crumbles and the selloff comes. 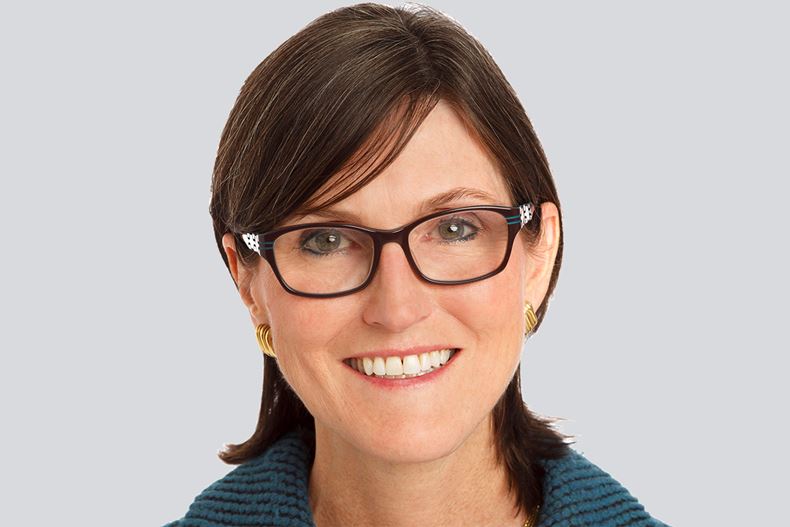 On a related note, I thought I would also return to my crowded trade analysis from a few weeks back. Prompted by my Beyond Meat endeavor, I have been researching one of the hottest new disruption trades in ETF land – synthetic bio, which intersects with alternative proteins when we get to lab-grown meat.

I believe this sector holds huge promise not only new therapies but also for new materials. I think it really is a huge market opportunity, and as you would expect Cathie Wood’s ARK is all over it.

But it’s also a tight space with only a handful of businesses that make the grade. And in these ARK, via various ETFs, is not just any old shareholder, it is absolutely huge!

At Crispr Technologies for instance, ARK funds overall comprise 13.4% of the share register. At Beam its 9%, at Editas Medicine its 16%, Intella Therapies 16.4%, and Twist 14%. Recursion and Zymergen both have ARK on the register but the holding is under 1%. I happen to think Crispr and synthetic biology is a huge growth market but it doesn’t take a genius to spot a crowded trade with potentially disastrous results if ARK’s ETFs ever get into trouble.