“I think we’ll be more selective in recruiting because you have two areas to recruit from, both high school and the transfer portal,” he told the AJC. “It’s almost like two recruiting seasons. We’ve always been really hard with our evaluations and we will continue to be hard in our evaluations moving forward.”

The primary reason is the heightened role that transfers have taken in the role of talent acquisition. With the transfer portal simplifying the process and with the elimination of the requirement for transfers to sit out one year at their new school, the number of transfers has skyrocketed. As of Tuesday afternoon, there were nearly 1,700 Division I players who had transferred this offseason – 4.9 per team – according to the website Verbal Commits. According to an NCAA report, the high in any of the four previous offseasons – and likely any season before that – was 704.

The portal now presents coaches with a deep supply of players who have already demonstrated their ability at the college level, are more experienced than high-school prospects and, starting this year, don’t have to sit out a year.

Pastner’s roster makes clear his growing reliance on the transfer market. His second team at Tech (2017-18) included two transfers of his 12 scholarship players. His upcoming sixth team will have five out of 13.

“The game has changed now because of the portal,” Pastner said.

As he surveyed prospects across the Champions Center, Pastner and his assistants were continuing to evaluate rising seniors, debating which ones merited scholarship offers. Barring players leaving the team as transfers, Tech should have four open scholarships for the 2022-23 season.

There are multiple reasons for their moderation in extending offers. One is that, because of the freeze on in-person recruiting, coaches hadn’t been able to evaluate prospects up close until Friday. But also, Pastner and his staff can afford to be more judicious in making offers because not only is he planning to allocate at least some of his expected four scholarships to the portal, but also because the team’s success has made the Jackets a more appealing destination.

A sampling of prospects Tech is pursuing, along with their coaches, indicated how Tech’s ACC title and its track record of player development have begun to shift the way the Jackets are viewed. Led by Swartz, Tech’s efforts to identify prospects early and create relationships have been impactful, lifted by the team’s on-court triumphs. 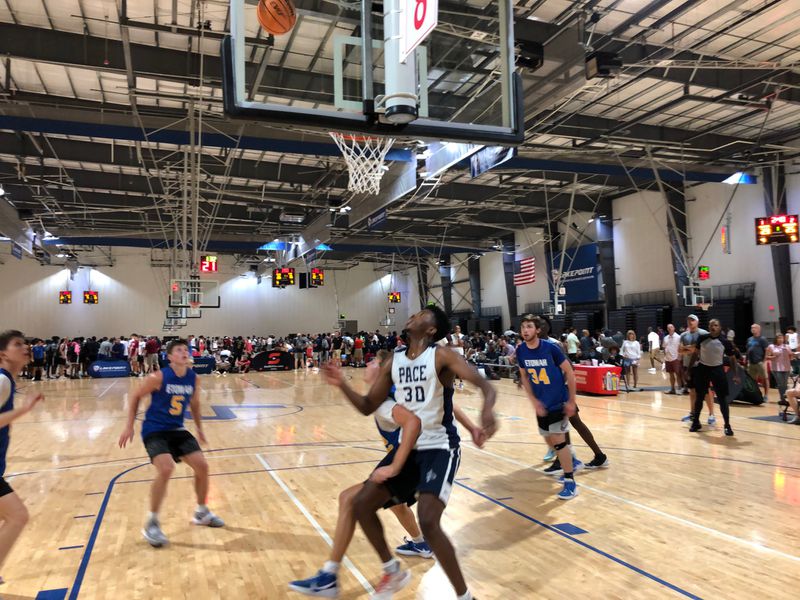 Pace Academy forward Josh Reed (white jersey) positions himself for a rebound in a game at the Georgia Basketball Coaches Association team camp at the LakePoint Sports complex in Emerson on June 18, 2021. (AJC photo by Ken Sugiura)

“They develop good players,” said Wheeler High point guard Isaiah Collier, a five-star prospect in the 2023 class who was to make an unofficial visit to Tech on Tuesday.

Wheeler High assistant coach Darnell Shepherd said that while kids had previously seen Tech as, in his words, “the underbelly,” they now have begun to pay attention to the Jackets.

“It’s looked at as a destination that they can advance at for academics and basketball,” he said. “At first, it was just thought of as a school that nerds go to.”

The transformation is evident in Tech’s incoming freshman class, which signed last November. The trio of guards Dallan “Deebo” Coleman and Miles Kelly and forward Jalon Moore is rated 28th nationally (247Sports Composite), the highest of Pastner’s tenure. Pastner’s pivotal 2017 class, which included Alvarado and Wright, along with Evan Cole and Curtis Haywood, both of whom left as transfers, was 78th.

In years past, Pastner said, “We uncovered every stone; we just couldn’t get anybody (highly rated).”

The deemphasis on high-school recruiting and the increased selectivity raises a question that Pastner himself has already pondered: If Wright were a high-school prospect now, would Tech still recruit him?

As Tech fans know well, Wright was barely recruited coming out of high school in North Carolina. He didn’t have much playing experience, but his long frame and athletic ability were extraordinary. With former assistant coach Darryl LaBarrie championing his cause, Tech successfully recruited Wright as he went ignored by nearly every other Division I school. After playing intermittently as a backup in his first two seasons, Wright was developed by Wilkins and assistant coach Eric Reveno into a solid starter as a junior before breaking out as a senior, leading the Jackets to the ACC title.

It bears mention that the situation in which Tech recruited Wright was different in many ways than its present context. One, Pastner was unable to persuade higher-level prospects to commit to Tech. Two, the portal wasn’t nearly the option then as it is now for bringing in talent (and, again, Tech didn’t have near the appeal it does now). Three, Pastner was operating on a plan to get to the NCAA tournament in his fifth year, Wright’s senior season, whereas now the mission is to be a consistent tournament participant.

Now, Pastner has a much better shot at a blue-chip prospect, someone likely more ready to contribute than Wright was as a freshman. The portal can deliver a player with much more experience than Wright had as a high-school signee. Paster might also have pause given that, if Tech were to recruit a high-schooler with the idea he might not contribute immediately, it’s become increasingly common for players to transfer out to get more playing time elsewhere, especially now that they don’t have to sit out a year.

“Would we recruit Moses today if we’re in the position we are today, (with) the success we’ve had?” Pastner asked. “I don’t know. Because you don’t know. At the time we took over, we were in a rebuild and we hadn’t had the success that we’ve had now.”

It is a curious notion, that Pastner might not make room for a player who would become ACC player of the year. On the other hand, it isn’t as though Wright was Tech’s first choice then, either. Pastner’s first class came together after he and his staff struck out on a slew of in-state blue-chip prospects in that 2017 class.

“Nobody wanted Moses Wright,” Pastner said. “Four and a half years later, he’s the ACC player of the year.”

Pastner and his staff will still labor on evaluation and development, an area where the work of Swartz, Wilkins and Reveno speaks for itself. The difference will be that Tech’s days of shopping from the bargain bin appear over.

“I just think the game is changing in a lot of areas, which I think we’ll have a better feel (for) in the next couple years,” he said. “Because you’ve got to factor in (athlete being able to be compensated for the use of their name, image and likeness), too. You’ve got to really be able to adapt and be flexible. Things are changing; there’s no denying it.”