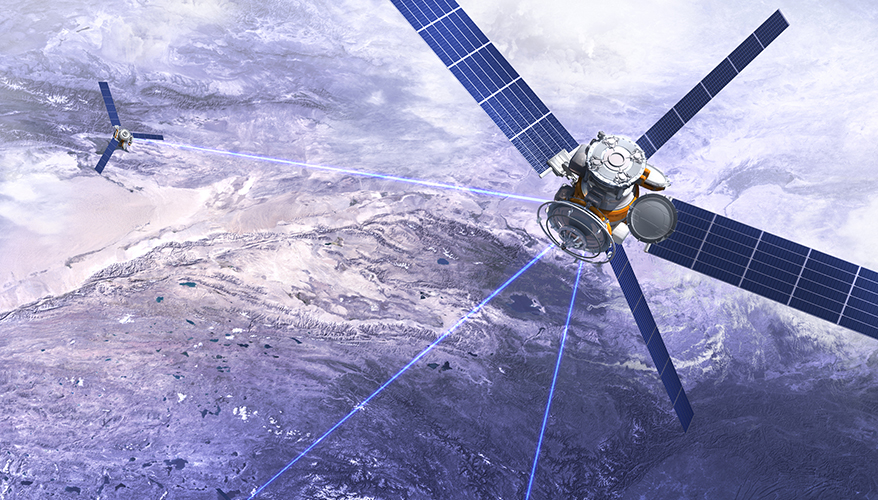 WASHINGTON: The Space Development Agency plans to launch five demo payloads on Friday to test capabilities that will make or break DoD’s plan for a resilient satcom backbone for All Domain Operations — optical communications, and the ability to fuse data from multiple sensors on board rather than on the ground.

The five payloads, four carried by custom-designed microsats and one by a hosted payload on a commercial satellite, are part of three separate technology experiments, said a senior SDA official who briefed reporters yesterday. Two of the experiments, each involving two satellites, are focused on laser links: one between satellites themselves; the other from satellites to an MQ-9 Reaper drone on the ground. The third (the hosted payload) is to test an on-board processor for command and control (C2) data.

SDA has “invested just under $21 million total in the three experiments the agency has flying on the upcoming Transporter 2 launch,” an agency official said in an email today. “The invaluable information gathered from these experiments will far outpace the monetary investment made up front as we begin to lay the foundation for the National Defense Space Architecture.”

The experiments and are indicative of just how ambitious SDA’s goals actually are.

In particular, SDA Director Derek Tournear himself has said that optical inter-satellite links (OISLs) are the key enabler for the Transport Layer, which is to serve as the communications backbone for Joint All Domain Command and Control (JADC2).

Further, that JADC2 backbone will require on-orbit data fusion in order to rapidly process data from sensors and shooters across the air, land, sea, space and cyberspace domains — and then move it to commanders. “The more processing that we can move into space, the better off we’re going to be,” another senior SDA official said yesterday.

The ‘proliferated LEO’ National Defense Space Architecture is made up of seven ‘layers’ that include six different constellations of hundreds of satellites — many planned for orbits between 800 and 1,000 kilometers — and a ground-based operations layer. Each of the satellites will weigh a few hundred kilograms” and cost, in Tournear’s words, “in the ten-ish millions.”

The Transport Layer is perhaps the most crucial of SDA’s planned constellations, but the other central focus for the agency is missile warning and tracking. SDA’s ‘Tracking Layer’ will use LEO sats to complement, and just as critically backup, DoD’s few and extremely expensive Space Based Infrared System (SBIRS) and the follow-on Next Generation Overhead Persistent Infrared System (Next-Gen OPIR) satellites. SDA is developing a wide-field of view infrared sensor to complement the Missile Defense Agency’s new medium-field of view Hypersonic and Ballistic Space Sensor (HBTSS) so that together they can better detect and track ballistic missiles, but also harder to see hypersonic cruise missiles in flight, according to the SDA officials.

SDA intends to orbit its first 28 satellites (20 Transport Layer birds; 8 Tracking Layer ones) in what it calls “Tranche 0” of the National Defense Space Architecture starting in September 2022. It plans to orbit new ‘tranches’ every two years after.

The five payloads, according to senior SDA officials, are part of the SpaceX Transporter 2 rideshare mission, which will loft some 88 different smallsats to LEO on a Falcon 9 rocket on Friday, weather permitting. They are: