“Visible markers really do strongly impact our sense of belonging like to see yourself reflected in the community,” Myanna continued, “I want to emphasize the importance of what this rainbow staircase means for not only Georgia Tech, but also the Atlanta community in recognizing the importance and the central-ness of LGBTQIA folks to the communities that were a part of.” 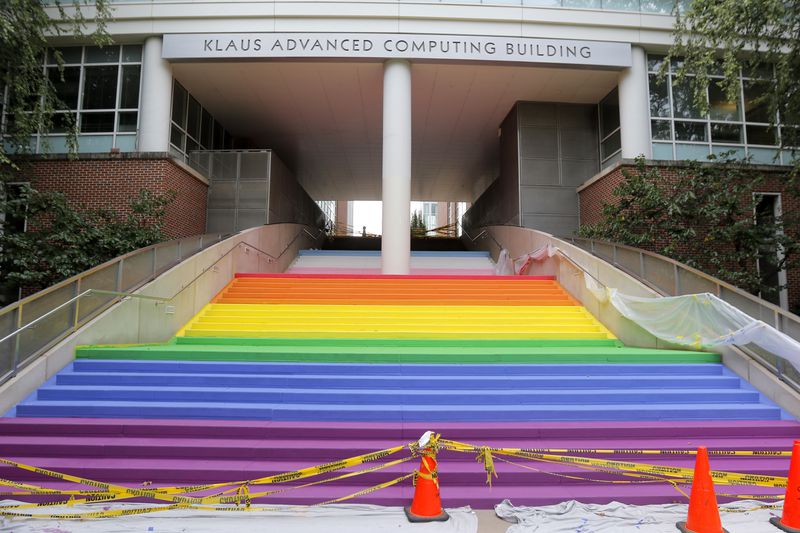 A mural designed by the Georgia Tech Pride Alliance president Lisa Medford is a work in progress on the steps of the Christopher W. Klaus Advanced Computing Building at Georgia Tech’s campus on Wednesday, July 14, 2021. (Christine Tannous / [email protected])

Myanna also said Tech does not have many visual representations of the LGBTQIA community, despite the community being very close-knit and active on campus. They pointed out that visible reminders of sense of place can increase a sense of community to college students, and increase retention rates.

The artist, Ting, is an alum of Georgia Tech and was active in LGBTQIA community while they studied at the school.

“Following COVID-19 LGBTQIA students exponentially face, housing concerns, food and security concerns,” she said. But, the funds are not limited to use for housing or food alone. Medford also mentioned that funds can be used to buy a new student ID if the student changes their name.

The stairs are visible for a large stretch of Ferst Drive and 5th Street, two often busy stretches that are frequented by many Midtown residents and commuters.

The location for the mural, the Klaus College of Computing, was chosen by Medford. The building houses the institute’s Computer Science major, which was Georgia Tech student Scout Schultz’s major.

Schultz, who also used the pronouns “they” and “them” was killed by a Georgia Tech police officer in September 2017. The shooting death sparked student protests, and conversations around mental health and LGBTQIA support at the school.

“I think there’s still work to be done,” Medford said.

Tim Jackson, 24, a Georgia Tech alum and Masters student said he was heavily impacted by Schultz’s death. Although he did not know Schultz personally, he had many mutual friends.

“I think what happened with Scout was awful,” he said. He then recalled the memorial for Scout when a campus police car was torched.

“I remember seeing the campus backlash against that. And like someone making a ‘thank a GTPD officer’ Facebook event, or seeing all this chalk “we heart GTPD”, and someone started a fundraiser for another cop car really left the impression, ‘Okay, the campus cares more about a cop car than a career student’s life,” he said

However, Jackson is proud of how the LGBTQIA community came together in the aftermath.

“Within that backlash, There was still the strengthening in the creation of this community and I think there have been structures that came out of that response that are still around, that are great,” he said.

Medford said she believes the administration’s support for LGBTQIA students has grown over the past several years.

“There are some people who are not [supportive] as there always are. But I think we have a growing student body who is, and specifically admin who are,” she said.