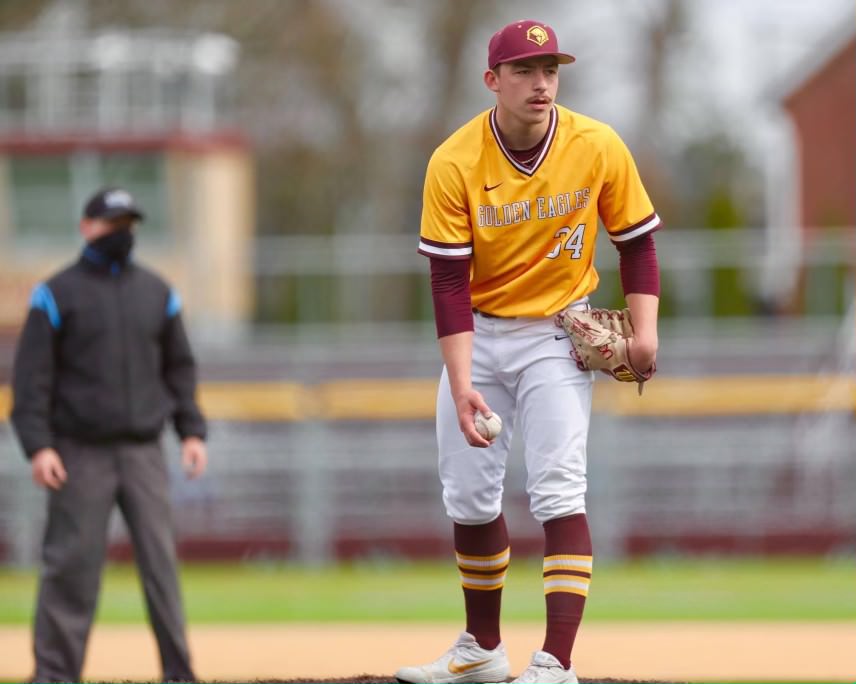 Logan Campbell looks to the catcher for the sign during a game while playing for the University of Charleston Golden Eagles. Campbell set the program’s single-season record for strikeouts and recently signed with the Minnesota Twins as an undrafted free agent. — Submitted photo

Logan Campbell’s phone rang during the 13th round of the Major League Baseball Draft.

Campbell answered and was told he was on the radar of the Minnesota Twins, who held the 28th pick in each of the Draft’s 20 rounds.

“Stay by your phone,” Nicholas Venuto, an Atlantic scout for the Twins organization told him.

The phone didn’t ring again until nearly an hour after the final pick of the draft had been made. Venuto expressed sympathy but told Campbell there could still be opportunities through the free agency market.

“Continue staying by your phone,” Venuto said. “You might be receiving another call.”

Hours turned into days for Campbell as he awaited correspondence. On Thursday, his phone rang again. It was Venuto, this time bringing good news.

“Are you still interested in signing in free agency?” Venuto asked.

“Logan, how would you like to be a Minnesota Twin?” Venuto asked.

At that moment, Campbell’s life changed and his childhood dream was realized.

After showing early promise during his younger days, Campbell was called up to varsity immediately as he entered Belding High School. It was there where Belding head coach Dave Riches, who was the pitching coach at the time, first got to work with the skinny 14-year old with a fiery fastball.

The two developed a strong relationship. Campbell was young for his grade, so watching him mature beyond his years was important for Riches.

“He’s always had the ability,” Riches said. “He always threw harder than anybody else. But the passion that he has for the game of baseball is way different than any kid I’ve ever had. He is addicted to the game.”

Campbell rolled through the competition at Belding, breaking several records in the process. Riches said his growth spiked because of his intense love for the game.

“I would say I was a pretty influential pitcher at Belding,” Campbell admitted. “I just wanted to come out, prove that people can come from small towns and do big things.”

“At times, during high school, things would come very easy to Logan,” Riches said. “Most kids would stay at that level, like, ‘What do I need to work on? I’m dominating.’ Whereas Logan would be like, ‘Coach, I need another bullpen.’”

Another key to Campbell’s growth was the weight room. Once he discovered the possibilities that came with getting stronger, Riches said Campbell took off. The records Campbell set were impressive, but Riches said it was his commitment that pushed him to the next level.

“He finally understood that he’s gotta get bigger, he’s gotta get stronger,” Riches said. “That was the start of maybe him understanding that talent is gonna get you there but the work is gonna make that dream finish.

After graduating from Belding High School in 2017, Campbell took a chance and traveled to Mesa Community College in Arizona. He spent one season at Mesa, where he appeared in eight games and finished with eight earned runs allowed in 10 innings.

Campbell returned closer to home for his second season, playing for Grand Rapids Community College. He earned his first career win for the Raiders in a showdown with Sinclair Community College in Ohio, where he went five innings without allowing an earned run.

He finished the season at GRCC with a 4-2 record and a 3.23 ERA. These numbers were good enough to earn him an opportunity to play at the University of Charleston in West Virginia, an NCAA Division II school. Campbell took the chance and traveled away from home once again.

His baseball career had taken him to Arizona, back to Grand Rapids and then to West Virginia. Charleston was the last stop on his journey, one he took advantage of.

“I think for me, traveling so far away, I played my heart out for my family,” Campbell shared. “Especially my mom; me and her have been through so much. I tried to base all my success on her and do it for her because, at the end of the day, she deserves it the most.”

Rising with the Golden Eagles

In his first season at Charleston, Campbell met several people he considers to be influential, including Hunter Townsend, a fellow right-handed pitcher who was an upperclassman.

“Basically, he took me under his wing and told me what I need to get better at and I need to get stronger and just throw the ball harder and develop some pitches,” Campbell said. “I showed up weighing 185 pounds and throwing 88 (miles per hour), topping. I left there weighing 205, throwing 96.”

In 2020, his first season with the Golden Eagles, Campbell made four starts during the abbreviated campaign. His final start of the season was his best — a complete game one-hitter in which he struck out 18 batters.

“Once he hit college, with the two JUCO’s and Charleston, (Campbell’s game) just went to a different level,” Riches said.

Shortly after the 18 strikeout performance — one that earned Campbell DII National Pitcher of the Week honors — the season was canceled. His stats from the season, namely the 44 strikeouts in 25.1 innings, put him on national radars. With the MLB Draft shortened to just five rounds, Campbell went undrafted.

He received offers to sign with organizations as an undrafted free agent, however, he elected to go back to go to Charleston with hopes of being drafted in 2021. A key to his success was constant competition with another teammate, right-handed pitcher Seth Nightengale.

“That was kind of a way to push me and push him,” Campbell said. “We always had an ongoing (velocity) competition. Whoever threw harder was always the bigger brother and whoever threw slower was the little brother.”

In his first start of the 2021 season, Campbell struck out 14 across six shutout innings in a win over Findlay. Campbell would have four more games in which he had double-digit strikeouts, finishing the year 9-1 with a 3.15 ERA and posting a program-record 101 strikeouts across 65.2 innings.

Campbell was named First-Team All-Mountain East Conference and First-Team All-Region for his performance in 2021. Though he still had another collegiate season at his disposal as a result of all athletes being granted an extra year due to the coronavirus pandemic, he was optimistic about his draft chances.

In the weeks leading up to the draft, Campbell and Riches would converse and discuss different things — but the draft rarely came up.

“I didn’t want to bring it up because it was his lifelong dream,” Riches said. “We thought he would get drafted. We were hoping he would.”

Although his name wasn’t called during the draft, the week ended the way he hoped it would — with an MLB organization offering him an opportunity to continue his career.

“I don’t think, for any of us who coached Logan or played with Logan, I don’t think any of us had a doubt as we watched him grow, especially during college, that someone was gonna take him at some point,” Riches said.

Now, he’s onto the next challenge. Presumably, Campbell will soon be off to Fort Myers, Florida to play rookie ball with the Twins.

He’ll never forget where he came from.

“I know Belding baseball has been there through it all,” Campbell said.

Riches, who learned of Campbell’s signing after a recent summer baseball practice, said his former pupil has paved the way for the future of his program.

“He was that 8-year-old, 9-year-old pitching at the little league fields,” Riches said. “Granted, he threw a whole lot harder than an average 9-year-old.

“We’ve been lucky enough at Belding to send a lot of kids to the college level in the last few years and play. And I’ve got a couple kids right now who have that dream. They’ll talk to Logan and he’ll be back here and he’s gonna come talk to them and tell them, ‘Hey, this is what it takes.’ We have that reference now.”

Christian Booher is an intern for the Daily News in partnership with WCMU Michigan News Group. Read more at radio.wcmu.org/dailynews.